The leaflets thrown by the Israeli aircrafts

translation:
(on both sides the same writing but different maps)
to the people of the strip:
the israeli defence forces repeat their alert forbidding
the coming close to the border fence at a distance less than 300 metres
who gets close will subject himself to danger whererby the IDF will take necessary procedures to drive him away which will
include shooting when necessary
he who has alerted shall be excused!
the IDF 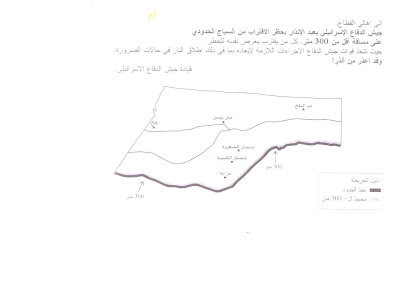 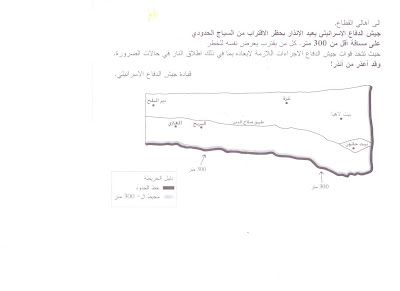 GAZA, (PIC)-- Israeli helicopters dropped on Monday morning thousands of leaflets ordering the Palestinians to stay away from border areas in the Gaza Strip, and threatening to open fire at any citizen approaching the borderlines.

The leaflets state that the Gaza people should not approach the electronic border fence, and should be at least 300 meters away from the fence or else they would be targeted by Israeli military fire.

Also, the leaflets include maps showing the areas that the Palestinians are not allowed to get near.

Warning leaflets were dropped over Beit Hanoun and Beit Lahia in the north, in addition to Al- Maghazi, Dir Al Balah and Abasan in Khan Younis, as well as all border areas in the Rafah area in the southern part of the Strip.

Many Gazans living near border areas will become homeless because they will have to leave their homes if Israel wages aerial attacks on the specified areas.
Posted by admin at 2:53 PM