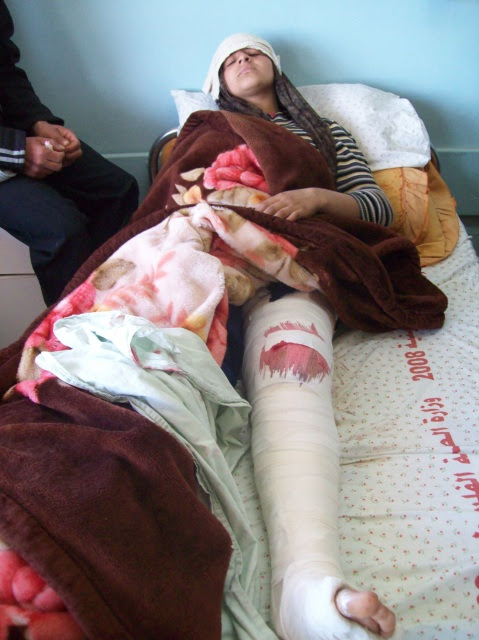 We went to see 17 year old Wafa Al Najar, who was shot yesterday, in Naser Hospital today in Khan Younis. In Palestinian tradition, both her family and neighbours were keeping her company. But they were able to do little for her, and while they all at once told us the story of her shooting and of Khoza’a, their village (where Israel has been accused of war crimes in the recent attacks) Wafa sobbed intermittently in pain.

During the recent Israeli attacks on Gaza, somewhere between Dec 27-30, Wafa’s 20 year old brother, Jihad Ahmad Al Najar, died in a Cairo hospital, evacuated there after he was shot in the head. Then, like thousands near the border, her family’s Khuza’a home was one of 163 local homes destroyed by the Israeli army. (The army also bulldozed 1500 denems of farmland there.) Yesterday at about 4pm, for the first time, Wafa (already with her arm bandaged after a fall on the school stairs) her mother Amal (Hope), and her brother Shahdi, ventured out to see their home’s remains. 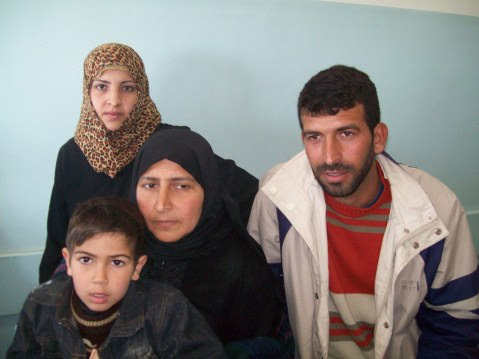 Wafa was 70 metres from her home, and and 800 metres from the border fence. Her mother and brother were 300 metres away from her. There were 3 shots, a neighbour who was 900 metres away says they were fired from two army jeeps and he saw a soldier shooting from the top of one. The first two bullets hit the ground beside Wafa. The third destroyed her kneecap, and she collapsed to the ground. Amal immediately thought she was dead. Shahdi tore off his white shirt to wave at the soldiers and began to move towards his sister.

“Don’t go! She’s dead! Come back!” his mother cried. And the soldier began to direct further shots at Shahdi and his makeshift white flag and he couldn’t continue, so he phoned for the ambulance. The ambulance was there within ten minutes, but before it got there, the jeeps had left and Shahdi was able to reach his sister and meet the ambulance with her in his arms.

Is there often shooting from the Israeli soldiers across the border into Khuza’a, we ask?

“Kulyoom!” everyone choruses - Every day. The various villagers tell us about life in Khoza’a.

“Along the border, there are normally two jeeps and a tank every 500 metres. And every 2 1/2 km, there is a gate they can drive tanks through to our side if they want to. And they have put microphones on the border fence, so they can play the sound of barking dogs at us, and shout at us, as well as the shooting.”

“In the Dec/Jan war here, 25 were martyred (killed) and 70 injured. In the first days the army didn’t let the ambulance reach us so people died from small injuries. But before that, in the past five years, we had 130 killed in Khoza’a by Israel - from shooting, from attacks.”

Various people start talking about the Khoza’a school. It was built in 2003, after the Oslo accords, exactly one mile from the border, as a result of an agreement between Yasser Arafat and Israeli Defence Minister Ehud Barak. Prior to that, the children had 8 km to walk to get to a neighbouring school.

Since then, it’s been bombed twice and occupied by Israeli soldiers at least once. This is a school that serves 380 girls, 400 boys, and 800 pre-schoolers, by starting at 6.30am and finishing at 6.30pm, holding two school shifts. But currently, the shooting directed at it is so intense that the kids spend a lot of their time on the floor, and only a handful of lessons happen each day.

“The reason the Israeli army gives publicly is, because resistance fighters are firing from behind the school.”

“No.” Everyone is very clear on that point.

“In the past, lots of people from Gaza would come to visit Khoza’a. It is the eastern most point of Gaza. And the Najar family is one of two very big, very well respected families here.”

“It took us 8 years to build our house. We only lived in it for 9 months. And we so wanted to see what was left of it. I just had to see it.” says Amal. “Other people had walked into that area since the war, but we hadn’t, not til yesterday.”

Why did she and Shahdi and Wafa go yesterday in particular?

“We heard there were internationals in the area.”

Oh no. E, EJ, and I look at each other, hearts sinking. We clarify.

But they weren’t. Because the internationals were us. Getting shot at with the farmers. Just like a normal Khoza’a day. Only for Wafa, so much worse.

A couple of people want to tell us something else. Something they want in Khoza’a. EJ translates again. They have a lot of doctors and other health care workers living there, they say. Maybe as many as 30. Beside Wafa’s bed now are two of them, a young male nurse and another young man who volunteers here at Nasser. And everyone is hoping that maybe, one day soon, some funding organisation from the outside world would help them build a Khoza’a hospital.

They have it exactly right. They have a much better chance that some country, some international organisation somewhere, will give them money for a hospital to treat their wounded closer to home, than that any country, any international organisation anywhere, will stand up to Israel and protect Khoza’a’s children from being wounded in the first place.